Stallion Profile: Our Entourage - Inviting You To His Crew

It is very rare that you see a stallion with only the best blood to offer, all in an undiluted package of speed, stamina, and soundness, and so it is with second-year stallion, Our Entourage (Street Cry - Sand Springs, by Dyanaformer). At first glance, he is the result of the same cross that produced a more famous daughter of Street Cry, the legendary Zenyatta. The cross is Street Cry with mares from the Roberto sire line, with added Hoist The Flag on the bottom of the pedigree. Unlike the imposing Zenyatta, Our Entourage is a moderately sized stallion with handsome looks that isn't too big, but isn't small either, standing around 16 hands high. The cross of Machiavellian and Northern Dancer sets up a very nice triple of Almahmoud (twice through Natalma). Our Entourage also flaunts doubles of Hail To Reason, Hoist The Flag, Prince John, and Nashua, with some standard-fare triples of Nasrullah and Native Dancer.

Add a Discovery for every Native Dancer plus a line of Hasty Road through Dynaformer, Discovery becomes a critical play when linebreeding for Domino, as Discovery has more of Domino's own family than Domino himself.  Other sources of Discovery that are absent from Our Entourage's pedigree are Bold Ruler and Intentionally. They should be considered power-plays in any mare brought to Our Entourage.

Further back in Our Entourage's pedigree are three lines of Tourbillon, two of them courtesy of Hoist The Flag. The multiple male lines of Glencoe via Vandal present in Tourbillon always amplify the many lines of Glencoe's legendary daughter, Pocahontas, she of the large heart gene and present throughout the Thoroughbred gene pool, but most prevalent in Domino.

While only a single line of Olympia is present in the pedigree of Our Entourage, one is enough, and any more Olympia that can be brought by his mates is pure gold. If you need proof of this, just ask Triple Crown winner American Pharoah how important the multiple lines of Olympia are to his success.

So, where is all this ultimately leading? La Troienne and her legion of ancestors are set up perfectly to return to the pedigree of this Temperence Hill Stakes winner. La Troienne is only present in Street Cry once. La Troienne is the result of the cross of full siblings, Ormonde and Ornament. Roman is present and also has the same Ormonde / Ornament cross. Ornament's legendary daughter Sceptre is present twice and will invite many returns, especially through File, dam of Kentucky Derby runner-up Forty Niner. File is laced with four lines of Ornament and will make a big impact with Our Entourage. Ormonde, Ornament, and any other crosses of Family 16, the descendants of Agnes add to the potency of the crosses. La Troienne can be found in any Seattle Slew, Numbered Account, and especially A.P. Indy. A.P. Indy has three lines of La Troienne, the most important of which is her maternal great-grandson, Buckpasser, who is a known genetic equivalent to Roberto.

Dynaformer has a couple genetic equivalents as well, one in the speedy but often fragile Dixieland Band. The other, Always Run Lucky, is not as well known but is bred on the same Traffic Judge / Warfare cross as Dixieland Band. If A is just like B, and B is just like C, then it stands to reason that there is a good chance that A is close enough to C to work well. Here is what the cross of Dixieland Band and Dynaformer looks like. 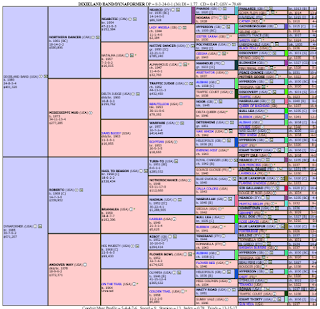 To top it all off, Our Entourage provides a line of Alleged, who offers a nice double of War Admiral to go with all the War Admiral in Seattle Slew and A.P. Indy, should they be present in any of his mates. Another good pedigree play involves crossing His Majesty with his full brother Graustark, and any other members of the Boudoir II line, like Floral Park, Your Host, and Your Hostess.

So, who do I think is going to be the hottest cross with Our Entourage in the coming years? It's a tie between three sires, one whose first runners are just starting to run on the track, one of which has already managed to be exported, and, finally, a soon-to-be-retired future sire who just keeps on running. So, what do these three have in common? Who's the key? The answer is Belle De Jour. Who on earth is Belle De Jour? She is the dam of the 4th fastest Kentucky Derby winner in the history of the race, Spend A Buck.

The three prime damsires are Gr. 1 Florida Derby winner and Kentucky Derby runner-up, Ice Box, Gr. 1 winner Friends Lake (exported to Saudi Arabia), and future sire, Gr. 1 turf superstar Big Blue Kitten. All of these have Belle De Jour in their pedigrees and in the right places. Ice Box has the distinct advantage of being the only one of these three that is actively covering mares in the U.S. and is by Pulpit (La Troienne, Nijinsky II, Buckpasser) out of a mare from the direct female line of La Troienne's three-quarters sister, Adargatis, with 3rd dam being Belle De Jour herself. Belle De Jour is loaded with both male and female strains of Tourbillon, and her son Spend A Buck produced Gr. 1 winner and Gr. 1 producer Antespend (dam of Friends Lake) from a mare free of La Troienne, free of Domino, but TRIPLED to Tourbillon. The importance of Tourbillon cannot be overemphasized when supporting linebreeding to La Troienne and Domino. Virginia stallion Friend Or Foe also has loads of Tourbillon, Domino, Prince John, and La Troienne and should also be an excellent match for Our Entourage, once Friend Or Foe's daughters are of breeding age. 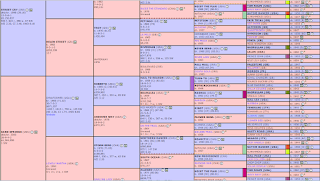 Hopefully, Our Entourage's progeny will make a huge impact and reward his co-owners, James Anderson and John Lewis, for selecting a wonderful stallion prospect and for supporting him with a nice handful of their own mares, putting their money where their mouth is. He certainly has a pedigree replete with speed, stamina, and soundness, and has enough pre-potency to pass all of this on to his get.

Posted by Jared Gollnitz at 9:59 PM

Need to save money on your IT?